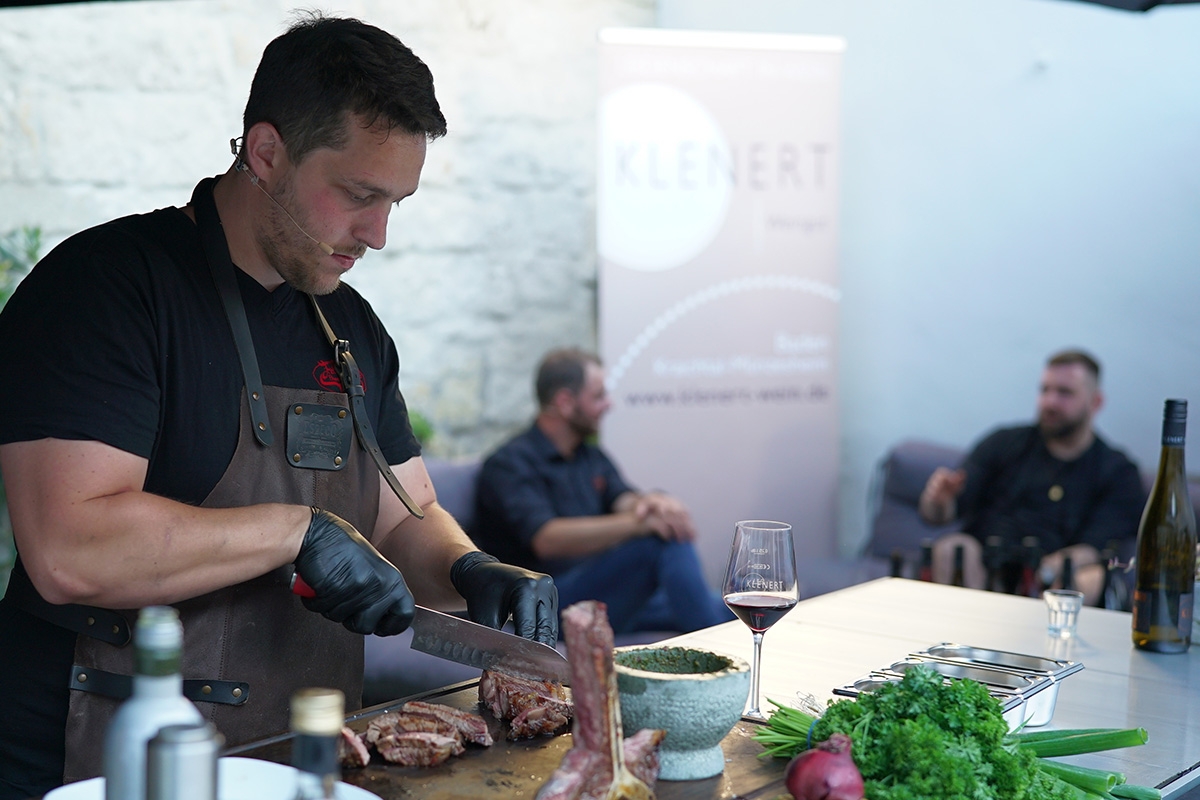 The technician signals with his fingers: “We will start in 3,2,1 … live! It is shortly after 5 p.m. in Münzesheim, the clock strikes wine time and running away is no longer possible. I’ve been watching the wine tastings of David Klenert (click here for a portrait of David) on the screen at home. And suddenly I am sitting at the other end of the transmission, vis-avis with the winegrower, in my luggage: an invisible backpack of stage fright. I am not alone with this. For chef Alex, the livestream is also a “in front of the camera” premiere. Because the traditional summer festival of the winery was hacked up by Corona, David said to himself: Not with me. And without further ado he thought about it: One is good, two is better, and three is a party – for the first time (in the series of online wine tastings initiated in the early days of the pandemic) I invite someone else to join me for a chat.

Against the dry throat David sits with the best medicine directly at the source, but it makes just also hungry. Therefore he invited cook Alex, who runs the Feldenguts Brasserie and Catering in Bruchsal. The wine tasting becomes a grill special, because Alex is a master of meat salad and in a firm relationship with the finest BBQ. All that is needed is someone who can give his mustard to both worlds. And then one day the inquiry was in the mailbox. Me as an expert to describe food and wine? Live? On Youtube? Phew. For me this was a tough challenge, I have a hard time with voice messages. Short and sweet: At some point I said No risk no vine fun – and bang, it was Saturday. But from then on nothing went fast anymore.

Review. 11 a.m. in Munich. Rental car pick-up. At 4 we wanted to be at the winery to discuss the process and to get accustomed to it. According to the Google plan: loose-easy. At shortly after 12 the car is ready. Smart idea from the car dealer to have only one counter on a Saturday. The compensation: Instead of a small SUV category, there’s an upgrade to a BMW X5 M50i. The feeling is a bit like the lady in the travel agency making Maldives out of Mallorca. Without extra charge.

If you check the small SUV category in your rental car and suddenly get upgraded to a Spaceship.

As if you knew it: The car is delivered matching the outfit.

To bother such a car with countless traffic jams and construction sites was a really bad move from the highway, and my nerves are as bad as the fuel tank. Meanwhile it’s 10 past 4, check in at the hotel, shower for seven minutes, change, off you go. Because of all the stress, the nervousness was a bit offended, because she wasn’t really allowed to play along. Exactly 14 minutes before the livestream starts, we finally arrive. Because you get recognition by car in the small streets of the town, but no parking spaces.

The whole Event is streamable via Youtube via this Link!

As we enter the courtyard where the set is set up, David comes towards us laughing. We see each other for the first time, but he is as relaxed as he was during the telephone interview back then. Uncomplicated, casual – and helps me a lot not to get nervous after all. Now I’m checking out what kind of effort is behind the charisma of the wine tasting. Two cameras are at the start, and a GoPro directly above the hotplate. A team of technicians controls the process, the Family is waiting in the background. Sounds funny, but after a few minutes you didn’t feel like a stranger anymore, because from the first moment on we were simply recorded in a cool way.

So that I also look like an expert, there’s a microphone on my hand, okay, better next to my beard.

Sounds funny, too, but: the moment I was wired up to the headset, you feel really professional and somehow the stage fright melted sip by sip. And I had not even had a drink.

Wired, still nervous but ready to drink: ready to go.

Even in the special edition, the usual procedure remains the same. Six wines will be tasted, after wine 2 and 4 there will be a short break. At the table bar you can see the line-up for Match-Day: Rosé Secco, Pinot Gris, Pinot Gris Black Label, Rosé, Cuvée Red and Pinot Noir. But this time the wine dates are still flirting with the delicacies that Alex conjures up on the grill across the street. How he gives the actually quite tasteless avocado with grilled meat and a cold salsa topping of tomatoes, onions, herbs, garlic and lemon such a sexiness – terrific.

After a few minutes we are on such a same vine wavelength that the camera slowly fades out and we chat with David and Alex as if they were buddies. I really admired David Klenert, how he as a solo artist can entertain people for two hours alone without running out of material. It’s easier to play balls in a trio and it’s more and more fun. The only challenge: the wines. I know how much fun they are, and how quickly you inhale them away. Of course you can’t do that in the stream. That would be stupid, David needs something to talk about, and we want to experience dessert. But of course I’m going to treat myself to a second test drink. Since you’re sitting so close to the source.

At the online wine tasting Grill Spezial in the courtyard of the winery, the weather is also in a really swaggy mood.

A different perspective. I can’t see what our drinking talk looks like on the screen. But at least it looks professional.

We drink the rosé with the avocados. There is nothing better in summer. David Klenert’s is as easygoing and uncomplicated as its manufacturer. It tastes like melted strawberry ice cream with a little tingling and you want to beam straight to the bathing lake with a tray of grilled salsa avocados and a box of rosé. During the break there is feedback from the team. “You guys are doing a really cool job. It’s like you’ve known each other for a long time.” That’s great to hear – takes the stage fright away.

When David is at the grill with Alex, I have a camera break. Time to pour out some of the impressions on Instagram.

It was a creamy tasting premiere for me, which encouraged me to refill the bottle: the Pinot Gris Black Label.

What impresses me: No attempt is made to represent anything. Alex is himself, David is himself anyway – and if the technology is a bit tricky or something falls over in the background – who cares. It’s not about being perfect or about telling everything like in a Netflix documentary. David wants to convey the fun of wine with the team. And for that you don’t need more than a camera, a microphone, the digital connection to the people – and just: great wine. And now there’s also food from the BBQ specialist, which is so delicious that I try several times to convince Alex to open a pop-up restaurant in Munich. The decision is still pending. Keyword imperfection: David makes it completely casual. When his little daughter crashes the set and runs towards him through the picture, she is allowed to witness the grilling from the first row. Simply authentic. Meanwhile the steaks are ready. Steak is still an understatement. The meat treat that Alex serves is already satiating several people present, one by one. The absolute taste treat is his Chimmichurri, an Argentinean herb sauce. One would like to take a bath in it. And the sauce raises the sex appeal of the meat to irresistibly addictive.

It is well after 9 pm when the technical team starts counting again with gestures. Cut. End of shooting. Tension falls from me, more important than the meat giants on the grill. But it quickly gives way to relief with a pinch of euphoria. Now we can toast, and also refill three or four times. With the whole team. And then wine and food take center stage again. The trip was really worth it. That’s exactly why I like to do the blog so much. Big stories arise from small contacts, and if you manage to get some viewers out there excited about something that excites you, that makes you happy, proud and justifies a calorie-rich barbecue banana with melted chocolate.

On Sunday before departure there is an unexpected highlight. David’s team was raving about Alex’ burgers. They are just as erotic as the menu he conjured up for us. Very gladly, the burger master says, we should simply come by. From 4 he opens the door. The hope has already evaporated, we must be on our way back in an unromantic way. In Munich, a parking garage with a time schedule is waiting for us. But not with Alex. Without further ado, he offers to open his Feldenguts Brasserie for us for lunch and to cook – and David and his team join us.

Five seconds later, the plate was empty: the spicy marinated fried chicken is a poem dish.

With the Smokey Burger the picture actually speaks for itself. A culinary sugar pass made of bacon jam, beef, pulled pork, fried onions, cheese and BBQ sauce.

A cool finish. And finish, as far as the plates are concerned. You simply taste the love and dedication to the product. This goes all the way to homemade Sriracha mayo. The Fried Chicken with a spicy marinade is guaranteed to put you in a good mood even after a really bad date. And the burgers. Yes. For the Smokey Burger with bacon marmalade, bacon, fried onions, beef, Pulled Pork and BBQ sauce you need, as David puts it so aptly: “A screw clamp to get that in your mouth.” That makes a mess, but (palate) eroticism can be a bit dirtier. Unfortunately there is no wine to go with it, I am the driver. But of course I took something for at home. Then I’ll have a look at the whole recording again in peace. Without stage fright. But with thanks for a simply unforgettable adventure.