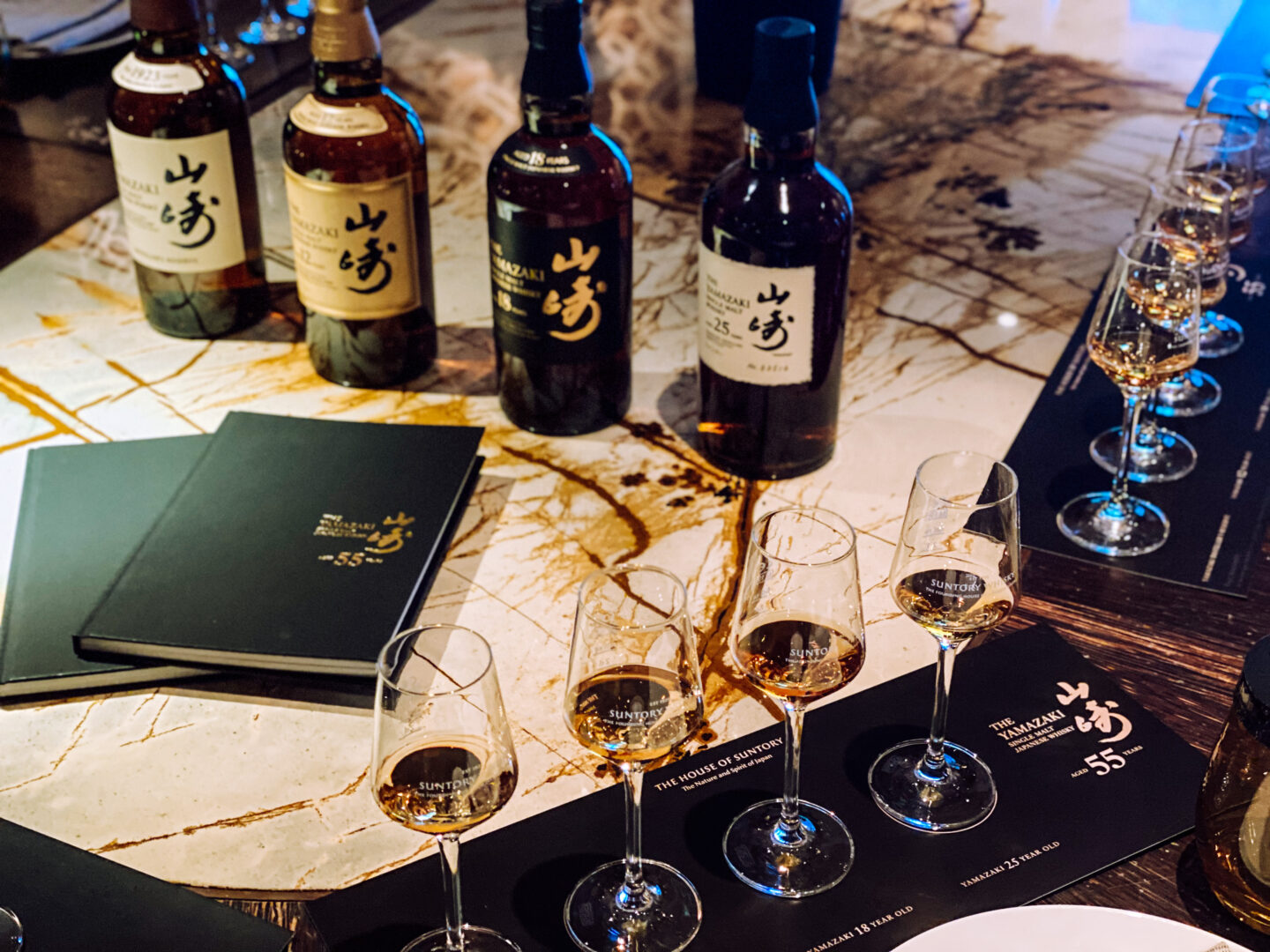 The Super Kickers around Captain Tsubasa, Takeshi’s Castle and then Pokémon – that was my connection to Japan in childhood and youth. At that time, first Panini pictures were collected for the soccer magazine and later baskets in the club. The passion for collecting has remained, it just changes on one’s own journey, meanwhile one keeps an eye out for new additions to the house bar. And in this search, after an invitation to a special tasting — no, not from Mr. Tsubasa — my eyes turned back to Japan after years. More precisely, to a little outside of Kyoto. For from there come collectibles that would present me with a real luxury problem. On the one hand, the noble bottlings from the house of Suntory Yamazaki are rapidly increasing in value, and are thus a real investment and jewelry for the eye. On the other hand, the childish culinary me screams: Whisky is for drinking!

Good for me that I could give these luxury problems a wide berth at the tasting in Munich’s Mandarin Oriental Hotel: Four lovely bottles had already been opened and poured quite down-to-earth, ready for testing. The real highlight, however, was the opportunity to taste a – yes, that’s right – Japanese, not Scottish whisky, with one part of a single malt barell, bottled in the year my dad was born. Quite a stark notion, isn’t it? The bottle of Yamazaki 55 Years is so valuable that it traveled to Munich specifically with Bodyguard. But let’s start from the beginning.

Asian delicacies and 5 outstanding whiskies were waiting in the restaurant of the Mandarin Oriental Munich. Fortunately, I didn’t pull the cloak of silence out of the closet.

Pleasure center in the countryside: The Suntory distillery just outside Kyoto.

was built in 1923 by Suntory founder Shinjiro Torii and is Japan’s first and oldest malt whisky distillery. Although Torii was originally inspired by traditional Scotch whisky, he developed a Japanese version by choosing a climate completely different from that in Scotland. Yamazaki Distillery is thus the birthplace of Japanese whisky. This region, nestled in Kyoto, used to be called “Minaseno”, the place where one of the purest waters in Japan originated.

Yamazaki is also the home of Sen no Rikyu, master of the Japanese tea ceremony. Located at the mouth of the Katsura, Uji and Kizu rivers, the Yamazaki distillery offers a unique misty climate and some of the softest water in Japan. The varying temperatures and humidity in this region create ideal conditions for aging in barrels, known as the characteristic “Suntory aging”.

My personal adventure playground – the Suntory Yamazaki whiskies are ready for tasting.

Several types of whiskey can be produced at the Yamazaki distillery. This is a unique nature that only a few distilleries in the world meet. At each stage of whisky production – fermentation, distillation, maturation and bottling – the distillers have introduced new innovative methods while continuing the techniques handed down from their predecessors. Drinking culture is just something fine. Yamazaki Whisky is Suntory’s flagship single malt whisky. Produced at Japan’s first and oldest malt distillery, it has multi-layered mizunara (Japanese water oak) and fruit flavors. For the choice of barrels has a decisive impact on the final spirit dress code.

The following four bottlings were then tasted: Yamazaki Distiller’s Reserve, Yamazaki 12 Years, Yamazaki 18 Years and Yamazaki 25 Years. Briefly for classification: This is Champions League semifinal. Prices start at just over 100 euros for the Distiller’s Reserve, and I later very reverently held the bottle of 25 Years in my arms for a photo – it was worth several months’ salary. Why do I mention the price? Because here, even as a beginner, you can taste the craftsmanship behind it. The color nuances vary from gold to copper and amber, but much more intense and complex are the different character traits in the taste.

One thing right away: Whisky tasting is not a right or wrong matter, where you will be taken out of circulation “Squid Game”-like if you misinterpret. On the contrary. Everyone associates other flavor connections, or even dishes, that such a glass reminds you of. You go curiously on a taste journey, exchange with the others, get new ideas, and are surprised in the end when dark chocolate meets strawberries or cranberries covered in cocoa powder. In summary, here is a brief overview of the dating profile of the four Suntory Yamazaki whiskey bottlings.

Captain Tsubasa couldn’t have hit my taste buds any harder. But let’s move on from animé to animating. All four whiskies are. You always want to follow up, taste again, with the incentive of discovering and finding out yet unknown flavors. I do love Gentlemen’s Journey hands-on courses. When tasting, I feel that the aesthetics of Japanese calligraphy, the fine characters that are also on the bottles, are reflected in the texture of the whiskies. It all seems like a light, finely tailored suit, but woven from countless high-quality threads.

On the plates as food pairing: culinary patronage from miso salmon to …

Finally – as if much could be topped – the bottle sculpture of the Suntory Yamazaki 55 Years suddenly stands before us. Three generations of master blenders were involved in the creation of this special Japanese whiskey: Under Suntory founder Shinjiro Torii, one component of this whisky was distilled in 1960 and placed in Mizunara oak barrels. A second component was created in 1964 under Keizo Saji, Suntory’s second Master Blender, and matured in white oak barrels. Shinji Fukuyo, Suntory’s fifth-generation chief blender, finally blended this Yamazaki 55 Year in collaboration with Shingo Torii, the third-generation master blender. Served in unexpectedly large glasses, this whiskey time travel is a delight. Nosing glass is exchanged for a Bordeaux-like glass. And let’s make it short: with these inner values, you can afford it. There’s only a small sip in the glass (legitimate, after all, only a handful of samples were even available), the bottom is barely covered – and it’s already fragrant from an arm’s length away. Of a lot – but not what one would have expected from whisky. Japanese craftsmanship can be found all over the bottle. The bottle opening is wrapped in handmade echizen washi paper and tied with a braided kyo kumihimo cord, a traditional craft from Kyoto. Just as exquisite as the bottle is the packaging in a custom Suruga lacquer-coated wooden box made from Mizunara oak, native to Japan.

The noble crystal bottle of Yamazaki 55 bears a calligraphy of the name “Yamazaki” engraved by sandblasting technique. The year is covered with lacquer and real gold dust.

Pure Jewel. The Suntory Yamazaki 55 Years is a jewel with Japanese craftsmanship.

The Suntory 55 Years is more like a very noble, multi-layered and woody manufacture perfume in scent and taste. Again, I have to think of the Super Kickers. Do you still remember the shots that flew over the kilometer-long field towards the goal for what felt like three episodes? A sip of this 55-year-old whiskey reverberates just as long. First, a strong whiff of fragrant sandalwood and a sweet shot of ripe fruit waft around the nose. The delicately smooth taste of the first sip develops into a kicking super-storm in the mouth. A mix of sweetness and unfamiliar but appealing nutty bitterness, followed by a woody note from the Mizunara oak barrel, a hint of smoke in the finish. Shouldn’t they have written a poem interpretation about this in the German A-levels? But well, these are luxury problems.

The 55 Years also tolerates the big stage, in this case: a large Bordeaux glass. This is filled by its intense aromas loose easy. Indescribable.

Color, smell, taste: The Suntori Yamazaki whiskies should be celebrated slowly, like a Japanese tea ceremony.

At the end is an unforgettable glass trip to Japan, which has shown me again why I do this blog. To be allowed to make exciting experiences on my Journey, to expand my own spirits horizons and to pass on this enthusiasm. Of course, you have to save a lot to get these liquid flavor flirts in your home bar, but let’s keep it here with Captain Tsubasa: Never give up (to dream).