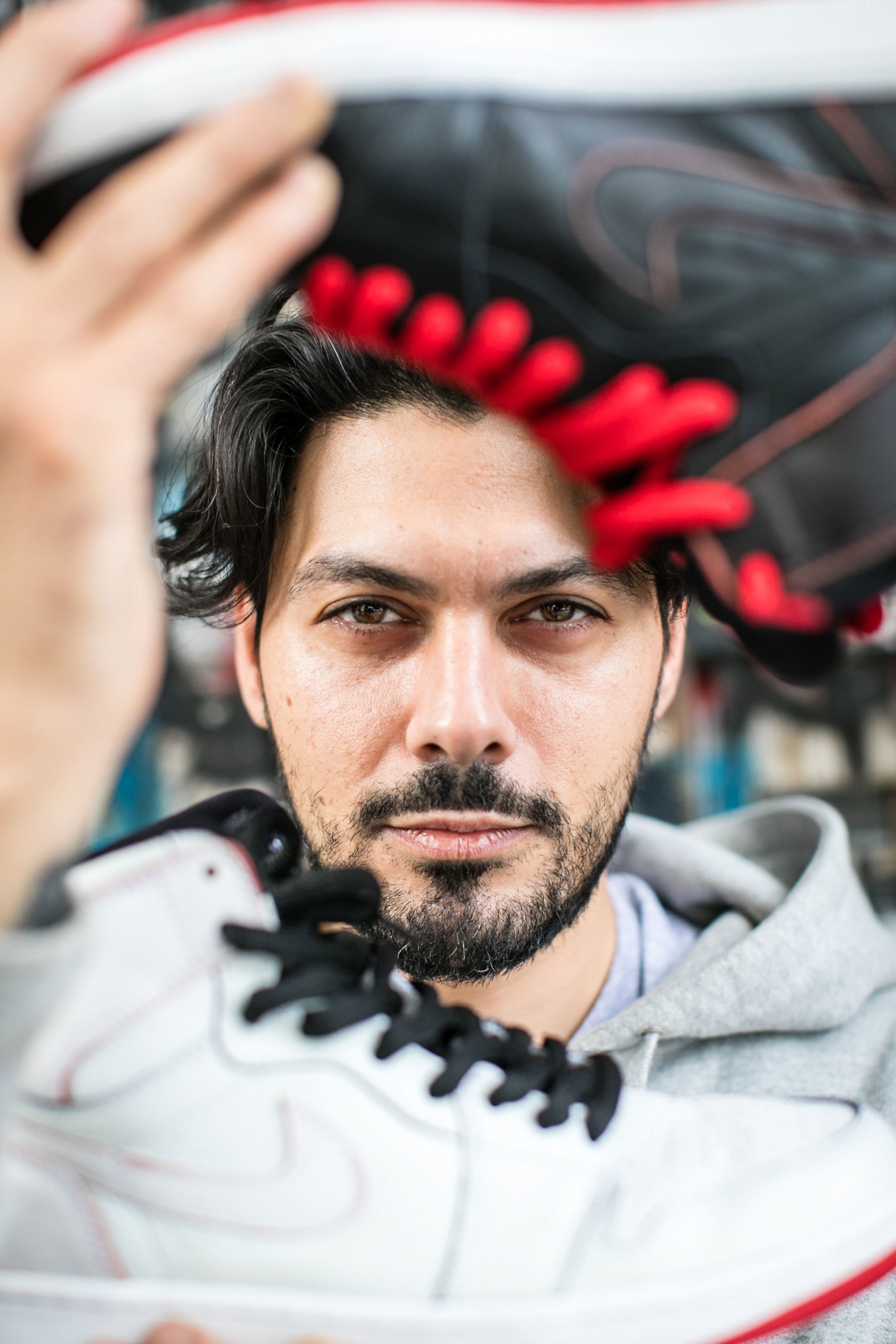 Last cut. He folds up the razor, puts it into the breast pocket with one movement. Takes the beard trimmer between thumb and index finger. Throws it up, turns on his heel, catches it behind his back. Flips it like casually like a cowboy the Colt, blows away the smoke in a fun way. Jacket pocket, tucked in. Recognizing look in the mirror, shaking hands. Two weeks later I’m sitting on his shaving chair. It’s December 2014 and I’ve been collecting appointments with him ever since. And Orhan’s are as much in demand as the sneakers he collects.

October 2018, Sunday morning, South Munich. Orhan opens the apartment door. Even the doormat in front of it is wearing Supreme. On the shelf behind him, the view falls on the first treasures. Nike Element React 87, Air Max 1er Elephant, Yeezy 750, off-white Chicago, investment: 1000 Euro. With the sneakers in the transparent plastic boxes above him alone, he could finance a Maldives vacation. But sand and the babies don’t get along so well.

Sneaker collector or: Soundtrack of the first love runs

In the eighties and nineties, sneakers became socially acceptable through the music scene. Shoes that had previously been worn for sports entered new territory. Many collectors of the very first hour came to their future passion through basketball. One of them: Orhan. “My first Jordan was the 8, Bugs Bunny, playoff, black. I immediately felt like I could play basketball much better.” When he fell in love, he was 5. He doesn’t consider sneakers a hobby. They are identity.

“One of my last pick ups,” says Orhan, and pushes a Jordan 1 High Court Purple into my hand. “Brutal thing”. How did it all start? The eyes sparkle like kids in a toy store. “It all started with the 4 Jordan. “1989 was the year. After my brother didn’t get the first ’88 Jordan 3. But it was also impossible to buy a sneaker for 250 DM. The film “Do the right thing” got everything rolling. It starts with a crass scene. A white man, with long hair and a Boston Celtics jersey, rides his bicycle over a white cement four. From a black man. An affront. That hurts when you tell it. It made the Jordan one of the first holy grails. And imagine how hard it is to get this shoe at the age of six”. About 30 years later, Orhan owns a handful of the model.

A date that turned into a relationship to which he has been faithful until now. Often in love, having a good time, he has separated from some conquests. Too little space. Too little time. “Sometimes I do it consciously. You can’t own everything as a sneaker collector. You have to make room for something new. I have friends who own four times as many sneakers as I do. But they are not happier. And then I prefer to make others happy with them. Orhan reveals his next treasure. “This here is a Jordan 4 Retro Kaws”. He carefully pushes the paper aside. “Can you feel this material? Madness”.

Sneaker collector or: put on, put on

Review. “Nice shoes,” says cowboy Orhan, who is preparing his chair across the street for a new shaving ride. Recognizing not him, my Yeezy Pirate Black too. Somehow clear that our getting to know each other started with a conversation about sneakers. The first look is always on the feet. Even four years later. Orhan wears Jordan 1er Retro reversed shattered, one of his favorite pairs. Available on the sneaker exchange StockX for several hundred euros.

Sneakers are investment objects of the hour. The imbalance between supply and demand creates worldwide hypes. And rising prices.

Collecting sneakers is also a challenge. But when things get tight, Orhan always has a joker up his sleeve.

Lord of the Kickz

We go shortly before the front door. Cigarette break in front of a grafitti-decorated wall. Orhan has got a visitor. Sven, owner of one of Munich’s most famous sneaker stores, is a very important contact person for him. Also sneaker collector. A walking encyclopedia. He knows how the hype originated.

“When Nike started skateboarding, they made country codes. You got different colors in Spain than in France. That’s how the swapping started. So to speak, the beginning of this culture, which has now found very bad peaks with reselling.

Today you have to be connected. To have a plug, as Sven calls it. Or no conscience. “Now people, financed by clients, drive their cars to Sneaker-Drops and buy their shoes down on Deadtstock. You pay 120 euros in the store, go outside, someone outside waves 500 euros – and then people surrender. Then the models are parked and four weeks later they are sold again with up to 1000 percent profit. Where is the real love in that?”

Laced up, watch out

What makes a person tick who does not take the effort out of greed for profit, but out of passion? Just like you and me. Only the clocks work differently. His crime scene time is not 20:15, but 10 a.m. That’s when most shoe models are released.

“Bartlord” Sven is Orhan’s most important contact person for sneakers – but also as a very close friend.

Sven takes a puff out of his cigarette. “What counts for me as a sneaker collector is respect. And that is why I support Orhan. He has earned it. Obtains the information about release dates, filters out his jewels. Becomes active. Many people think it just falls into their laps without having achieved anything. He does this with taste. With clear announcements. With organization. And respect is a currency that always increases its value. When Sven talks, Orhan is silent. But he agrees with every look. Meanwhile, the two understand each other without words. They could fart Morse codes, each knowing what the other thinks.

Of jokers and treasures

Back in the apartment. Orhan pulls a new box out of the closet. “Wait, I really have to show you this”. He pulls an orange shirt from the shelf. Supreme, sure. A real treasure. The individual letters are backed with pictures of personalities. “And you know this one – from going blank”. He pushes the Air Max 97 Off-White into my hand. And grins wider than the Joker.

Batman’s opponent is immortalized on Orhan’s skin. The Joker has fascinated him since childhood. A good-humored villain with brains. Not a spoiled big shot like Bruce Wayne, who never had to work for his success.

The tattoo fits to Orhan. He can always play the right card. Is an entertainer. Showmaster. Memory acrobat. Has all cuts of all regular customers in his head. All preferences. Black coffee, two sugars, coming right up. How was the vacation in Sardinia? The beard again with a run, tapering, sides short. Please. Thanks. Probably nowhere else are our emotions and moods as strongly linked as with the right haircut. And show is one thing. Performance is the other. Only it is not always appreciated.

“I am not a machine,” says Orhan, and he follows the contour of my hair with a knife. Anyone who knows him will notice that if something goes against his grain, he becomes more taciturn, and the emphasis changes. Not drastically, but you can feel it. What he does not like is unpunctuality. For us, it’s five minutes, and it throws his entire daily schedule off track. The delay adds up with the customers, the next one has to wait, asking stupid questions. And Orhan can cancel his lunch break. You have to take your time for quality. And behind his cuts he stands with his name. You don’t put that under value in the shop window.

Box Office. For Orhan, every box content has a special meaning.

To get work and sneaker collector’s love under one hat, you have to act smart. Must love it. “The sneakers are also motivation for the job. I have tried to sell myself better. To be even more agile. If I know tomorrow: I want to buy this off-white – then I’ll be even more responsive to my seven or eight customers. And everyone benefits from that. I make people happy to make me happy. With Orhan, you can feel that even as a stranger. With a suppleness like a Michael Jackson moonwalk, he draws shaving lines and applies pomade under the hair. And with the same passion with which he gives haircuts at the Munich Barberhouse, he collects and maintains his limited edition sneakers.

Sometimes, however, the joker in him comes alive. “I like his unpretentious manner,” says Sven, “and I have to collect myself with laughter. “Jordan Chicago Campout, everything was already set, snake. Orhan came by bicycle. Then he talked to the kids in a way, yes, he just took power. An aura like Heath Ledgers Joker. Said very easy: From now on i take care. You don’t make a sound anymore. You there: H&M shoes, never heard of Jordan before, and now you’re standing there. Get out of my way!”

When he and Sven started, there was no Internet. But for their holy grail, the sneaker collectors took upon themselves the incomprehension of their environment. “There are many who do not understand. But I also don’t understand how people drink hundreds of Euros every weekend.”

“Fancy a drink? Because I appreciate short-term appointments or shortened breaks, I return the favor now and then with his third passion: rum. This one today comes from Guatemala. Ron Zacapa XO. Orhan looks like Michael Jackson after the grip in the crotch. “Dude!” His greatest effort?

An Air Jordan 1 in cooperation with the Japanese label Fragment design. A shoe for which Orhan camped three days before the store. In freezing cold December. He raises the glass.

“That was over Christmas. We knew: Friday this shoe is coming. In Germany exactly two stores sell it. Both in Munich. And he runs one here,” says Orhan, and pats Sven on the shoulder. “That’s how we met.

Sven has to remember another joker moment. “Hypercon, sneaker collector’s fair at the Zenith. We had a buddy with us from South Africa. Polite person. After half an hour we are out. Smoking. Orhan was already standing there, leaning against a corner in the shade, inhaling the cigarette like a Japanese mafia boss. Ten meters away, a strong guy shuffles by. Long shirt, gray baggy jeans, the off-white Jordans underneath just barely recognizable. Orhan points with his finger at him: “There! Look. You. Look! That’s what I talk about all the time. Not being able to appreciate and not being able to walk. With the guy who heard all this, the swag breaks into small pieces. The buddy from South Africa has to translate it all first. Takes half a minute. Then he just says: No, you did’t. Was a great Sunday.”

Like every damned Sunday, Sven and Orhan go through the sneaker appointments. This time Orhan wants a coveted ticket. A new off-white is coming. He gets up, flips the Jordan, with which we just wanted to photograph him, into the air. Catch him, and places him on the shelf. Right next to a beard trimmer, bright red like Joker’s make-up, decorated with Supreme lettering. Orhan grins. But even Batman would have to queue up with him for an appointment. If he even gets one.