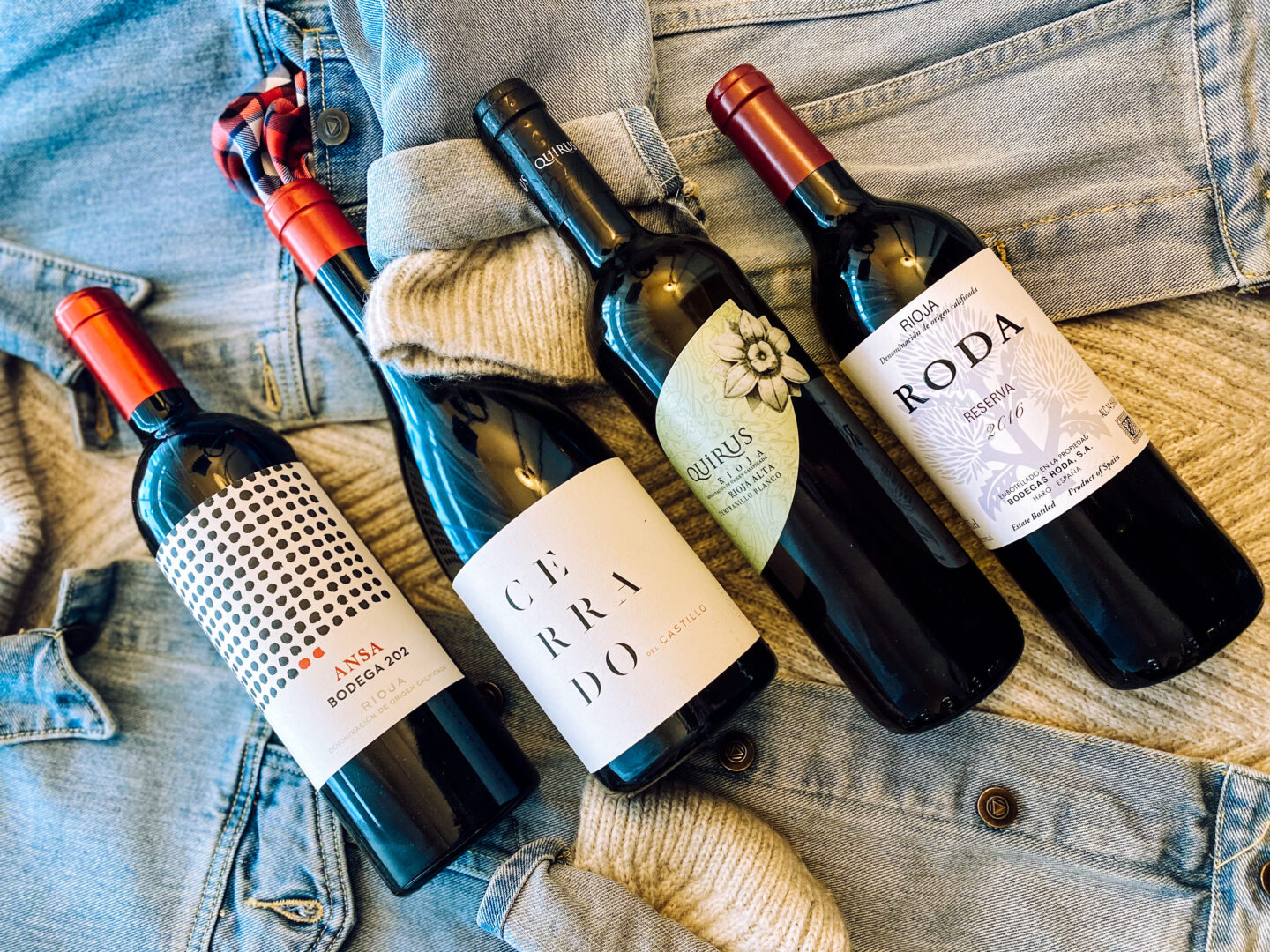 I have already been to Spain, but the Rioja region and I had not yet had a date. Of course, I was aware of the wines, but still no contact, so it was urgently time to start a glass trip to the famous Spanish wine region. The so quite incidentally reinvents itself, without, however, the traditional culture to disregard. But one goes also times new ways, young winegrowers take over, file at the taste dress code. I brought a small selection of Rioja wine into my tasting arena and did what every winemaker I ask how I can learn more about wine recommends: tasted it. But first a few facts around the wine region, because a look behind the famous region is worthwhile to get an insight around the wines.

In a nutshell, DOCa Rioja has three areas, each with its own viticultural characteristics – Rioja Alta, Rioja Alavesa and Rioja Oriental (called Rioja Baja until 2018). The geographical conditions have helped to form a natural region that is perfectly delineated and distinguishable from its surroundings. The 65,326 hectares of vineyards protected by the Denomination of Origin are distributed among Rioja Alta (27,347 ha), Rioja Oriental (24,590 ha) and Rioja Alavesa (13,389 ha).

One hundred kilometers separate the westernmost town, Haro, from the easternmost, Alfaro. The vineyards are located in a valley with a maximum width of about 40 kilometers and rise in stepped terraces up to 700 meters in altitude. A total of 144 municipalities are part of the DOCa (118 in La Rioja, 18 in Álava and 8 in Navarre) because “their soils are suitable for growing grapes of the required quality”. The entire region benefits from the meeting of two contrasting climates (Atlantic and Mediterranean) with mild temperatures and an annual rainfall of just over 400 liters per square meter – ideal conditions for growing grapes.

Handmade and artisan: there is more history in Rioja wines than just a label.

Rioja soils are also very suitable for quality viticulture because they have a balanced structure of sand, clay and loam, slightly alkaline and low in nutrients, with moderate amounts of water in summer. Overall, the wine region is characterized by diverse soils (calcareous clay, ferruginous clay and alluvium are the three main ones) and microclimates (orientation of the vineyard, protection from wind, etc.) that give the wines unique characteristics. Depending on the use of different grape varieties and cultivation methods, this allows a wide range of wines with differentiated personality within a perfectly recognizable common identity.

There are currently 14 grape varieties authorized in Rioja. For red wines, these are Tempranillo, Garnacha tinta, Graciano, Mazuelo and Maturana tinta. The white varieties are Viura, Malvasía, Garnacha Blanca, Tempranillo Blanco, Maturana Blanca, Turruntés, Chardonnay, Sauvignon Blanc, Verdejo. You hear many of them also for the first time? Not at all. It makes me even more curious to see how they taste.

One of the differentiating traits of Rioja wines is their great aging potential, a characteristic that only great wines possess. Through a proper aging process, in which oak plays a crucial role, the wine undergoes a beneficial evolution that highlights its value and gives it new aromatic and flavor characteristics.

Rioja wines have the elegance, originality and character of great wines – something that can only be achieved when, over time, grape varieties, terroir and winemaking techniques have merged. Given the viticultural diversity of the region, wineries traditionally proceeded by blending grapes and wines from different grape varieties, vineyards and municipalities, seeking the complementary characteristics that would elevate their respective qualities to perfection in the final product.

This is undoubtedly the best known type of Rioja, although wineries are offering an increasingly wide range of styles – with wines of great concentration and expressive fruit from specific, individual vineyard plots.

Vines like these could tell a lot of stories. If they don’t speak fluent Rioja, who will?

Depending on the traditional aging process, Rioja wine can be divided into four categories, which can be distinguished by the four different back labels. The Control Board assigns the labels numbered to the wines that meet its quality and typicity requirements:

This category guarantees the origin and vintage of the wine. They are usually first or second year wines that maintain their original freshness and fruitiness. This category may also include other wines that do not fit into the categories of Crianza, Reserva or Gran Reserva because they have undergone a maturation process that is not certified by the Control Board.

Crianzas are wines that are at least in the third year, after having been aged in oak barrels for at least one year. For white wines, the minimum aging time in barrel is six months.

Four letters, one opinion. Beginners should try the Roda Rioja, it is a good starting wine for the wine journey.

The famous Rioja region is reinventing itself without forgetting its roots. The first insider tip is something for friends of the very dry humor. The Spanish winery Bodegas Roda is located in the middle of the famous Rioja region. It was founded in 1987 by Mario Rotllant and Carmen Daurella and named after their last names. Outstanding quality was the goal of the two, which is continued today by principal winemaker Agustín Santolaya. The resulting wines are ready to drink and at the same time very long-lived. Through traditional Rioja winemaking methods, as well as a sustainable, gentle cultivation method and reliance on old vines, the winery team achieves excellent results. On 21 plots, grapes are closely monitored and regularly tasted before being harvested by hand and respectfully processed. Typical varieties include Tempranillo, Graciano and Garnacha.

The reserva in the nameof this Bodegas Roda stands for Champions League, and indeed the red wine reminds me of very elegant loafers. It smells of smoked cherry ham, cedar, lilac, violet and caramel, in between always comes through a hint of BBQ notes. All the flavors seem frame-stitched into shape, very straight. On the feeling of long-lasting angularity at the back of the palate you have to get involved, but is rewarded with real conversation! Bodegas Rioja Reserve, Price: 29 Euros, via www.hawesko.de

The label is infatuation, the content bristles with character. Those who appreciate it will have a lot of fun.

The outfit of the Bodegas relies on an elegant-creative dress code that the winemakers continue in the bottle. Ansa gives the class of the oldest vineyards (70+ years old, some centenary) in the glass, located mainly in the town of Elvillar. The red wine (with a ticket for around 40 euros) is not mainstream television, but an exciting evening of film that you should get involved to understand the idea. But then is rewarded with real conversation material. Tempranillo grapes from Rioja Alavesa, one of three growing areas in the protected region, are aged for 14 months in French oak barrels, which gives the wine its very dry humor. It smells fruity, you feel as if someone nearby is inviting you to a barbecue. Immediately images of a relaxed but classy cut linen suit and a terrace come to my mind.

Ansa Bodega 202 or: point winner in terms of materiality.

The opening is peppery, edgy, settles strikingly on the tongue. Like a catwalk of dark fruit, the connoisseur sits frontrow. Shortly after the first sip, currants then put themselves in the spotlight. Not mainstream, but that’s what makes (glass) travel so interesting. Ansa Bodega 202, Price: 42 Euros, via www.bodega202.com

This white wine secret tip feels comfortable even with the summer mood temperatures that are slowly emerging in our country. White wine from Rioja? Yes, the red wine location also has some fine Blanco checks for pleasure tours in the bag. Like the Quirus Rioja Alta from the Tempranillo Blanco grape variety from bodegas quiroga de pablo. Already the straw yellow color with green reflections sets first flirts.

A cozy white wine with exciting edges: the Quirus Rioja.

The Tempranillo Blanco, aged in stainless steel tanks, is not a wine that walks down the street in a gorilla stance and goes into the nose, it takes it a touch more reserved. But good so! For this, aromas of melon, pineapple, lime are so finely woven together in a mineral suit that you really have fun discovering. Another friend of dry humor, but one should share curious. The ticket to the patronage is available for about 20 euros. Quirus Rioja Alta Tempranillo blanco, Price: 16 Euros, more via www.bodegasquiroga.com

Rioja Cerrado or in short – a nice tasty piece of conversation.

Spain Safari. Rioja Cerrado is elegantly cut like its label, but also has a lot of temperament.

Why we have here king class in the glass? The wine is made not only in old vineyards of the walled castle area, but also only in exceptional years when the harvest reaches its maximum. The Tempranillo vines are up to 40 years old, so there is quite a bit of history in the bottle. Therefore also here: Give time. Let in. Smell, let it come, taste, wait again, taste again. Discover aromas little by little. And the discovery tour is conducted very stylishly. At the beginning, a spicy, deep dark carpet is rolled out directly, knitted from intense notes of red fruits. Don’t get stuck there, there’s everything from cherry to currant. Even with a pinch of chocolate in the approach. And the important thing is: it should taste good! The extraordinary red wine is present in the mouth for a long time, not a troublemaker, but someone who confidently knows how to express his character. And that’s what makes wine exciting, isn’t it? Rioja Cerrado del Castillo, Price 44 Euros, via www.riojawine.shop

Dress code: please drink. La Pera is a white wine that knows how to behave.

We continue our glass journey through the Spanish wine region. As mentioned, it’s famous for its characteristic red wines, but it also has a team of charmers in white jerseys. After all, one sometimes has female visitors who share my wine quirk, and a relaxed white wine can’t be missing. The white Tempranillo grape was first discovered in 1988 in the region around Murillo del Río Leza, and it tastes very special. Quite as wild as the label with a bicycling ox and animal company suggests, ain’t the La Pera Blanco Rioja from the Hacienda El Ternero . Imagine rather an eastern salad with chinos and summer shirt, which does not want to stand out at all in the nose at the beginning. But at the first kiss of welcome, La Pera then brings out casually swirled aromas of apple, banana and citrus that really dance beautifully across the tongue. Just not a cheesy mating dance, but like someone really feeling it. It also reminds me of really nice apple-banana iced tea – but perfect for summer. And all that for under 10 euros.

Shades of White: The Rioja La Pera is simply an awesome piece of grape fabric.

Fancy a casual fun white wine, which has a really uniques, but super charming label, and certainly makes all fellow connoisseurs curious? Then get on your bike! Rioja La Pera, Price: 10 Euros, via www.wein-port.de

Even more interesting facts about the exciting wines from the Rioja region, tips, stories and liquid inspiration can be found on the official site www.riojawine.com