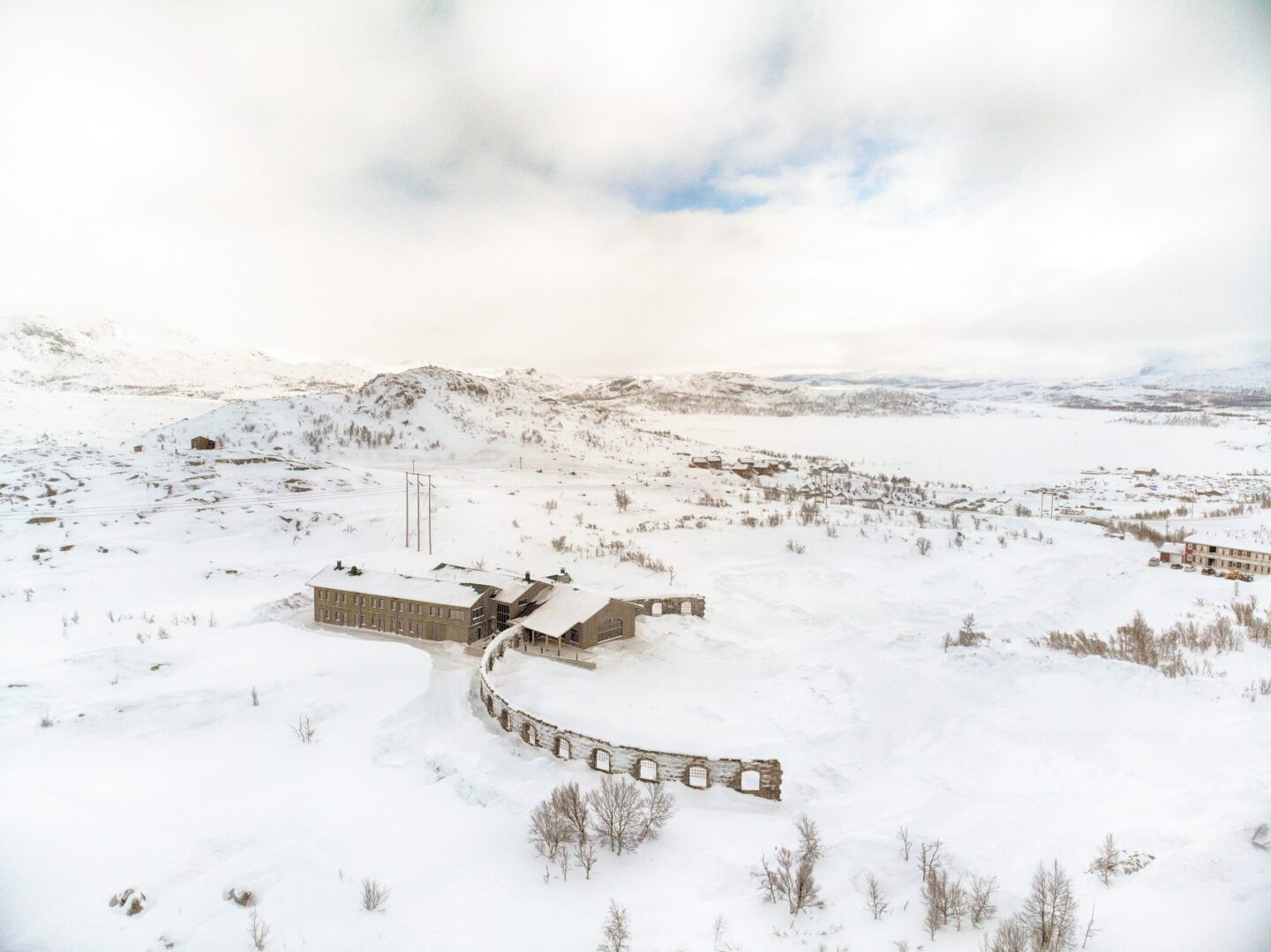 Now I’m not really a skier or snowboarder, but that should be bearable in the Niekhu Mountain Villa. Because in addition to the pole position for winter sports enthusiasts, the hotel on the border between Sweden and Norway has a dignified wine cellar in the gondola. By combining heli-skiing and nature experiences all year round with world-class accommodations, the hotel aims to secure a leading position in global adventure tourism. Given the arguments, it should succeed in doing so. The hotel – whose name Niehku means “dream” in Northern Sami – was recently recognized by National Geographic Traveller in the Best New Hotels category of the Big Sleep Awards 2020. What makes it special is the integration of the past into the new construction.

The cozy lodge is located just 50 meters from the Norwegian border and was built on the site of the old Malmbanan roundhouse (the iron ore railroad). The circular ruins, which are a protected monument on the railroad line between Kiruna and Narvik, cut through the new building and are a spectacular reminder of the region’s history. In addition, one of the grease pits, more than 100 years old, located on the wall where workers labored under the locomotives, has been converted into a wine cellar. Behind the idea, by the way, is the same team that has already equipped the adventure vacation on the lighthouse island with unique design – here you come to the post about the Pater Noster.

The concept, interior design and graphic profile of the hotel are the responsibility of Stylt, a firm that has worked on a number of alpine hotel projects in Gstaad, Val Thorens, Chamonix and the Canadian Rockies, among others. The building was designed by the architectural firm Krook & Tjäder.

Niehku Mountain Villa has 14 double rooms on offer, as well as a restaurant, bar, lounge and spa. Cue cuisine: Chef Ragnar Martinsson and team extend the adventure on the plate, and aim to serve Arctic cuisine in a modern way. Means: the best ingredients of nature, local products with a focus on game and fish from the forests, mountains and lakes. But the highlight is yet to come: the cellars hold some 500 wines, carefully selected by co-founder Patrik “Strumpan” Strömsten, whose passion for wine is matched only by his love of skiing and the wilderness. Patrik is the only person to have twice been named Sommelier of the Year in Sweden. Watching nature there by the fireplace with a selection of great wines – must be dreamy. It’s clear that Niehku Mountain Villa is on the bucket list.

The steam room. In the lobby you can sit around the fireplace with a drink from the bar. The ambience: uniquely cozy.

Wow. Where mechanics used to work under the trains, there is a wine cellar with a glass roof. Crazy.

Incidentally, from the lodge visitors can also reach some 60 skiable peaks between Riksgränsen, Abisko and the Kebnekaise massif by helicopter. The ski season here extends until midsummer, when you can even ski under the midnight sun. And when the season is over, you can hike, bike, climb, hunt, fish and have other great adventures in this breathtaking mountain landscape, with Lofoten and the northern Atlantic coast nearby.

Overnight stays with breakfast start at 395 euros, the restaurant is also open to non-hotel guests and offers a fixed menu, starting at 88 euros, a selected wine accompaniment at 78 euros. If one considers, which quality is poured out there somewhere in the nowhere, that sounds however actually already again fair. This dinner experience will not be forgotten so quickly. I’d love to spend a few days taking a close look at the wine cellar in Niekhu Mountain Villa. And then it’s not tragic if you’re snowed in for a night longer.

Sounds like a vacation menu I’d love to try safe. What about you guys?