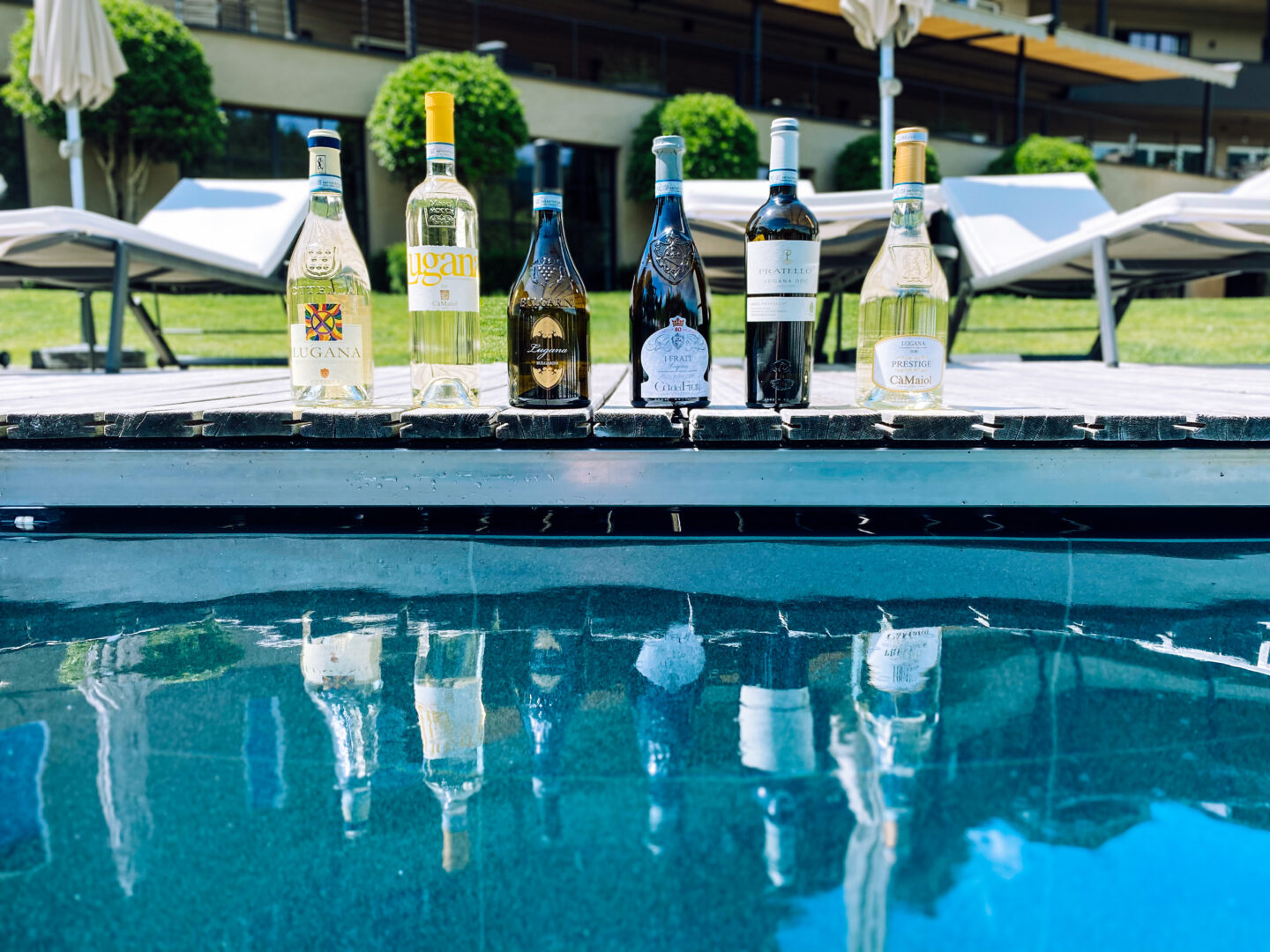 Lugana, which stands for Italy, Lake Garda, white wine indulgence, lightness, vacation. The prime example of the taste of Lugana wines are the I Frati Lugana of the winery Cà dei Frati and the wines of the winery Cá Maiol. But of course there are many other exciting Lugana fruit salads out there worth trying. I have worked together with the experts from Sentivini a small selection of Lugana wine into my tasting arena and did what every winemaker I ask how I can learn more about wine recommends: tasted. But first, a few facts about the wine region, then I’ll introduce you to the six wine tips one by one. Cheers!

Lugana stands not only for one of the most popular white wines, but also for a growing area where Trebbiano di Lugana is cultivated on about 700 hectares of vineyards. The production area near Lake Garda includes the municipalities of Desenzano del Garda, Pozzolengo, Brescia as well as Verona. One part of the growing region is thus in Lombardy, the other in Veneto. Not exactly accessible, but with rewarding results: above all, the high dependence on weather conditions makes it difficult to work the soil. The region has two specific types of terroir that significantly and so strikingly shape the taste: In the larger core area of the wine region between Rovizza and Lugana, as well as in Desenzano and Sirmione, a harder clay layer is found. The proximity to the water provides better conditions, which in the end make up the characteristically mineral Lugana wine. Things get considerably hillier In the area to the east around Peschiera del Garda, San Martino della Battaglia, Lonato and Pozzolengo. More glacial sediments and sand determine the clay soils here. But this is by no means a disadvantage, because this gives these wines much more structure in appearance.

When Lugana knocks on the door, the welcome basket usually contains the typical aromatic filling: an intense mix of citrus, almonds and nuts. The dress code of the vintage Lugana: straw yellow to greenish. The golden yellow Lugana Superiore matures for at least a year. Throws for it, however, also a more multilayered tone on the aroma turntable. Quasi a soundtrack of grasses, apples, hazelnuts, tangerines and citrus and rather salty character. You will not hear sweet tones – classically, the Lugana wine is vinified dry. However, it also goes with more patience. The Lugana Riserva with scents of eucalyptus and flint is aged for at least two years, including six months in the bottle.

The tasting bundle of Sentivini consisted of six different Lugana wines. And these are included.

The Lugana Ca Maiol drives its quite unexcited, fine line. That deserves a like.

Summer, sun, sunshine. What sounds like a kitschy hit song is also one, but does not annoy acoustically, but spoils casually elegant in the glass. This Lugana here is a yellow card that you should pick up without a care in the world. Because this is a wine that will warn you if you start chatting too much about it instead of just drinking it.

The Lugana Maiolo by Ca Maiol is obtained from Turbiana and is named after the manor Cascina Maiolo, built in 1710. The grapes for this wine come from young and medium-aged vines, raised with Sylvoz and Guyot, with an average annual yield of 100 quintals per hectare. The nature of the calcareous soil, interspersed with layers of clay and formed by alluvial deposits after the last ice age, as well as the manual harvest, the soft pressing, the controlled fermentation give this Lugana the particular characteristics of its straw-yellow color with greenish reflections, its delicate perfume and its mineral taste. The Italian white wine refreshes with charming waves of apple, pear and almond. Very light, very delicate, very unexcited. Like floating on an air mattress in the pool, arms and legs dangling in the water – but retaining a decent pinch of sexiness. And all that for under 10 euros.

Again Ca Maiol, but this time a different dress code. The bottle appears more bulbous, and yes, the contents also turn out a bit weightier. But this is positive in all forms, it simply jumps more multilayered tailored flavors in the glass. The name says it all: Lugana D.O.P. Prestige is produced on a unique soil rich in clay, plus the mild microclimate of Lake Garda and the autochthonous Trebbiano di Lugana vines with their white-fleshed grapes. The selection for the production of the Prestige is made through the exclusive use of grapes from the Trebbiano di Lugana vines, which are on average 30 years old and grow on a 25-hectare area of the main estate Cà Maiol, seat of the agricultural company Cà Maiol. The Cà Maiol “Prestige” Lugana is one for lovers of dry wine humor, you sniff on the first date the typical aromas of Granny Smith apples, wild thyme and mirabelle plums. Then on the tongue, waves of citrus notes of lime and lemon zest alternate with a slightly salty filigree acidity, all unexciting, unpompous but so delightfully charming for that very reason. Beautifully fresh, beautifully mineral, without wanting to show off, all for around 12.50 euros. That has class again.

At this winery is sustainable looking forward. The Pratello idea is based on the use of renewable energy sources, ecological balance, effective use of energy in the vineyards and the natural synergy between animals and plants. The Pratello rises on the Morainic hills of southern Lake Garda. It is an area with a unique microclimate, influenced by Italy’s largest lake. An area with over 3000 hours of sunshine a year, refreshed by light breezes in the morning and evening. Cozy starting point, therefore, for a Lugana. Also the clear Pratello Lugana Catulliano DOC is aimed at fans of dry wine humor when it comes to vino from Lake Garda. The first scent sample? Floral-fruity, except that any form of kitsch was sold out. Quite clean cut, very invitingly fresh juniper berries, pear and apple greet the nose. Even at the first sip, the appearance of the wine dress code from 100% Turbina grapes is right. Pleasantly soft, not intrusive, more like a relaxed white wine that takes you by the hand and pulls you towards the water. Sweet and salty but with bite, plus the crispness of apple and pear. Sounds a bit like a cake, and if it were, it would be gone in seconds, even with a calorie label on it. Another one of those white wines that doesn’t care if it’s going solo or going into something solid, because it just stays as it is. A charming entertainer. And the price/performance ratio is also hard to beat at a flirt ticket of under 10 euros.

The Lugana DOC production area extends between the counties of Verona and Brescia in a flat landscape. The municipalities (Sirmione, Desenzano, Lonato, Pozzolengo) of the Doc area are almost all part of Lombardy, only Peschiera del Garda belongs to Verona. The area has just 850 hectares of vineyards. Keyword terroir: the area consists of a diverse stratification of compact clay soils, naturally calcareous with microorganic sedimentation. This type of soil and the extraordinary microclimate of the Lake Garda area provide optimal conditions for the cultivation of Trebbiano di Lugana. At Weingut Otella the motto is to make fine and elegant wines, but always with a clear identity to convey who you are. The grapes for Otella Lugana DOC come from the vineyard San Benedetto di Lugana and surrounding area. The grapes are harvested and selected exclusively by hand. Here, too, an inviting, fresh citrus scent welcomes the taster, along with a pinch of exotic fruit, while the white wine also has a rucksack of spiciness in its luggage. A finesse-rich refreshing wine that never loses its lightness. But you don’t want a heavy wine, especially in summer anyway.

This bottle post is certainly one of the most famous, who hears Lugana wine quickly has this bottle in mind, and sees himself taking time out with it on the lakeshore. Absolutely understandable. The company Ca’ dei Frati, as evidenced by a document that “tells of a house with cellar in Lugana, called in Sirmione the place of the monastic friars”, is known since 1782. In 1939 Felice Dal Cero, the son of Domenico, who was a winemaker in Montecchia di Crosara in Verona, moved to this very house mentioned in Lugana di Sirmione, understanding from the beginning the vocation of the area for viticulture. After thirty years of work in the vineyard and in the cellar, his son Pietro participated in the creation of the DOC and began bottling his first label of Lugana Casa dei Frati, later Ca’ dei Frati. In 2012 Pietro Dal Cero passed away, leaving the cultural heritage to his wife Santa Rosa and children Igino, Gian Franco and Anna Maria, who continued the business with the same passion and determination.

For me, one of the biggest funnies out of this was the I Frati Lugana – because it’s a real all-rounder for just under 11 euros, but it’s not without its rough edges. The Cá dei Frati fruit salad here is almost synonymous with Lugana. It smells invitingly casual of peach, flowers and herbaceous meadows, almost as if you’re having a delightful nose out the window while driving along the shores of Lake Garda. Each sip is a little splash in the water, plus a wave reminiscent of damp lime – and this minerality, in tandem with a fresh, juicy entry, flavors of herbaceous citrus and a very un-kitschy creamy flirtation, makes for a real summer match. And that for just over 10 euros. That’s how attraction works.

This poolside spot at the Seehof Nature Retreat in South Tyrol is well deserved, because Bulgarini Lugana is also on the menu there. So you can hop by the pool with a glass at any time. Bulgarini Lugana DOC is yet another wine to just glide along. Whether daydrinking or at sunset on the balcony – it always goes. The grapes for Bulgarini Lugana DOC grow on clay and gravel soil that has its origins in the glacial moraine hills of the Quaternary period. The Lugana tickles with the typical aromas of apples, ripe peaches, apricots and other yellow fruits, joined by a fresh breeze of floral and herbal tones. Not cheesy, not off the wall, not a wine that wants to ask you 30 flavors first, no: an aromatic day at the pool, with nice spice and fresh wind, with which you should and can simply have a good time. No more, but also no less.